Do you remember when you were in kindergarten and the teacher had tons of sticker charts strewn throughout the classroom?
Yeah, I loved those!
In fact, I still do. So much so that I brought them back in the PICU. And these bad boys work!
It's so funny to see what kids will do to get a sticker on the chart. And ultimately the prize that they get at the end once they get a certain amount of stickers.
I've used them for a teenage boy who didn't want to eat. I've used them for a 5 year old girl who never wanted her physical therapy. I've used them for a feisty little man who had a horrible temper.
But most recently, my sticker charts were used for my boy that I've been caring for off and on for the 2 1/2 years. Unfortunately for him, more "on" than "off."
We were really trying to get this kiddo out of the PICU and right back home where he belongs! So we set up a sticker chart. If he made it 21 days without having any desats or "events" then he got to go home.
Yes, I'm aware...this isn't a very fair sticker chart! It's not HIS fault if his lung collapses (AGAIN!) and he starts having frequent desats.
But, it was a pretty decoration for his door. So we stuck with it!
And finally, yesterday, despite being 43 stickers over his goal (yeah this 3 year old is an overachiever!), I was able to send him home! 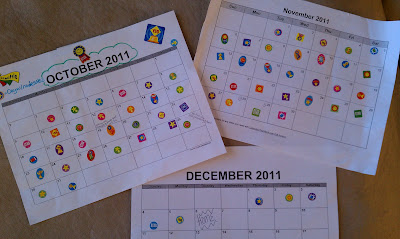 Ohhh, what a day of mixed emotions!!!! I was SOOOO excited that I got to send him home, where he really should be!
But, my goodness, this admission was 8 months! And the 2 admissions before that were 6 months each. Throw in a bunch of shorter admissions, and I've taken care of this little guy for a majority of his life.
And I've loved it! So there was a little piece of me that was sad that he won't be there when I work on Friday. And more, I think that I realized that this was probably the last time I will ever take care of him as his nurse.
Now I have no idea where my career is taking me, but most likely I won't be a staff nurse for much longer. And hopefully he won't be back before I am officially working as a nurse practitioner.
So there was definitely some sadness there.
But he's home, and that makes me very happy!
And the sticker chart proved to be awesome once again as well! So rock on sticker charts!!!
I'm beginning to think they may be helpful in real life (yes, there is a real life outside the PICU!). Perhaps it would motivate me more to drink more water each day, go to the gym more regularly, or get more home improvement projects done.
Hey, if a pedicure or new pair of shoes is the reward at the end, I'm pretty sure I could rack up those stickers real quick!!! Whoa, there really is power in those stickers!