It's April which means time for the annual Midyear Review.  It's a time to check in with the manager, go over the goals we set 6 months ago to make sure we're on target for reaching them, and evaluate what we are doing well vs what we can improve.

I've worked in the same PICU for the last 9 years, and really have never had much feedback in the "what we can do to improve" area.

This year, we have a new manager who strongly believes that at least one area for improvement needs to be focused on.  So I knew after talking with several other APNs who already had their review that there would be some legit personality feedback.

That being said, I had NO idea what to expect going in.  And let's just say when I left, I left with a smile on my face.

Not because I didn't have something to work on.  But because what I had to work on was something not surprising to me...and because of the way that it was presented. 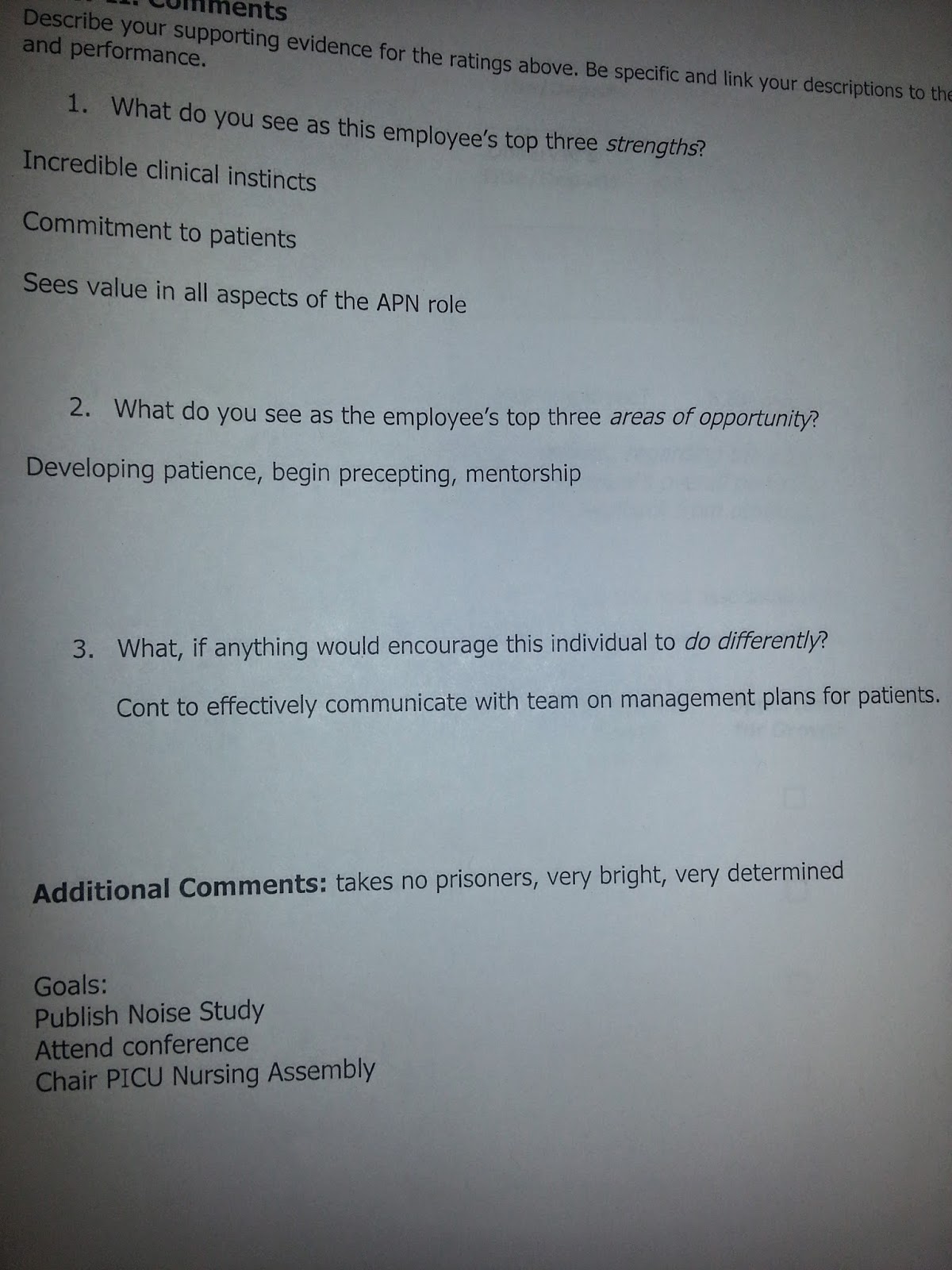 So as my manager started saying "The top area for improvement is"...she had a smile on her face.  She then proceeded to say "I would work on your patience...particularly with the newer fellows."

Now a fairly recent conflict came to mind in which I was extremely frustrated with a fellow who did not act in the best interest of the patient, and didn't follow the plan that we had set out the day before.  Let's just say I walked in that morning fiery and let him know it.

So I asked if this area of improvement...patience...was based on that particular incident. My manager said "Oh, absolutely not...that situation was 100% called for and the way you handled it was filled with passion for the patient, and a bit of impatience was very appropriate to fight for what was right!"

So when I asked for examples, she simply stated that at times I come up with a plan for my patients, and if the fellow isn't "on my level" I can get impatient with them waiting for them to get there.

I'm not entirely sure what that meant (or rather, couldn't think of specific examples), but I definitely realize that I can certainly work on patience in general.

She then proceeded to say that while she can tell that I am impatient at times because she knows me so well, other physicians that provided anonymous feedback were surprised to hear this because I come across and "joyful and pleasant".

We then moved on to the "Additional comments" section and I just had to laugh out loud.  What in the world does "takes no prisoners" mean!?!?

She laughed and said that a physician gave that feedback and said that I was a very hard worker, and would do whatever it takes to get the best care for my patients...taking no prisoners along the way.  *I'm definitely thinking this was referring to the above incident, that afterwards was fully supported by the APN manager, PICU director, and Critical Care medical director...yes, it was a rather large situation which is why I was so firey!*

So in a way, the impatience is tied in with taking no prisoners.

As a PICU APN, I love my job.  And I love caring for patients and their families.  I want what's best for them mind, body and soul, and yes I will fight to make sure that happens.  So if a little bit of impatience can help to get that done, I'm ok with that.

However, I know there are areas that I can grow in.  Focusing on areas of my impatience that can have a negative impact on myself and my co-workers is one of them.  I want to be a team member that people enjoy coming to work to see.  Someone who lights up the PICU that can be a dark place at times.  Someone who can admit to their flaws, and change them, or work on turning them into a positive.

At the end of the day, it was another good PICU Midyear Review.  Probably the best review that I've ever had because it actually gave me something to work on, on top of giving me a ton of encouragement. And while I will definitely work on my patience, I have no plans on "taking less prisoners"....because really, how awesome does that sound!?!?

Rounding in the PICU

PICU Rounds are a big part of the day.  It's the time when the APN's can present their patient, summarize what is going on, and then state their plan of care for the day.

Usually I love rounding.  It lets me take responsibility for my patients.  It calls me to think more about them.  And it definitely teaches me a lot.

The other day, I learned a big lesson.  As I was presenting my patient, I got to the summary part, and said something to the effect of: "This patient remains critically ill, has pulmonary and kidney injury consistent with Wegener's disease..." and went on.

Only to find out later in the day that it is now considered a faux pas to call it Wegener's anymore.  Apparently Mr. Wegener was a Nazi, and that just doesn't sit right.  Instead, it's now called Granulomatosis with polyangitis.

So there ya have it.  You learn something new in the PICU everyday.  This APN certainly learned that she doesn't want to be supporting Nazi's or diseases named after them.  I will definitely not forget that one!
Posted by Dana at 4:26 PM 2 comments: