It was a Sunday night shift like any other night shift.  Until it wasn't.

Our unit over the past 5 days or so has been unusually slow.  Actually, slower than its been in years!  So Sunday night I went in to work my 16 hour call shift and was hoping for a chill night.

Which it was.  Until the fellow that was also on call told me that I lost something.  Something important.

I immediately thought, "Oh man...did my Volte phone fall out of my coat??? He's probably been trying to call me and thinking I've been ignoring him since I didn't answer!"

As I walked closer to the area that he was standing at, I realized my phone was still in my pocket.

My next thought was, "Oh man...I lost my patient sheets.  All the information on the patients I'm caring for tonight is gone."

And yet, there they were in my other pocket.

What could I have possibly lost!?!?

And then I saw what he was pointing to: 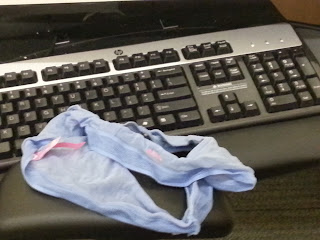 Yup, Victoria Secret lacy thong, all in its purple glory on the computer at the main nursing station!

And no, these most definitely were NOT mine!!

Which led me to "EWWW!!! Why is there underwear on the computer!?"

We definitely had a good laugh.  And apparently my shriek was a little loud because the charge nurse came running over to see what the fuss was about.  And so did about 6 other nurses in the area.

It was obviously someone trying to look Sexy on this particular Sunday.  Except they didn't pull it off, because they clearly weren't wearing them!  Eww... I'm not sure that makes it any better!

Guess we'll just leave it at hope you had a Sexy Sunday...everyone deserves one every once in awhile!
Posted by Dana at 6:48 PM