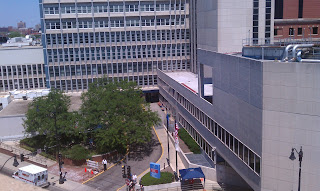 Haa...I just read the last sentence of my last blog and realized how empty that promise was.

No, I do not have pictures for you this weekend.  At least not pictures of our gorgeous anniversary getaway.  I was lucky enough to upload a few from my phone that would be more appropriate for this post.

I'm not sure why I even thought I'd be able to get to that this weekend.  I knew it was going to be a big one.  Monumental actually!

It was a weekend of saying good-bye, and looking forward to the new beginning starting tomorrow.

Since November 2004, I have walked through the same door to get into work.  Tomorrow I will walk through an entirely different door.

And not just because I'm going in the back way.  I will be walking into a completely different building.

We have moved.  As in, the entire hospital moved yesterday...in 1 day!  In about 14 hours to be exact! 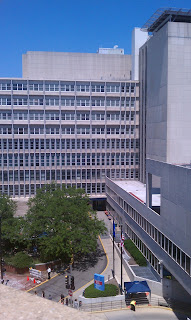 It's something that we've been planning on for the past couple of years. But yesterday it happened.  One of the reasons "The Move" was planned in June is because it is typically a low census time for us.

But not this year!  Oh No!  I can honestly say that in the past 7 1/2 years that I've been there, I've never seen a beginning of the summer so crazy.  And not just the number of patients, but the acuity was also sky high.

So it definitely made for an interesting and exciting day.  But everything went extremely smoothly, if not a bit faster than I was expecting!

Of course, the PICU was the last to get all the patients out, but in all fairness we had the most amount of kids (40!) and some of the, if not THE, sickest kids in the entire hospital!  So there!

I have to say it will be bittersweet walking into a completely new hospital tomorrow.  No longer will we have "the alley."  And there will be no sentiments in the new room numbers.

And then of course there were the rooms you'd walk by and have flashes of things you wish would leave your memory. Children that have passed.  Parents that were grieving.

And then there were the rooms that made you remember, "Wow, we worked as such an incredible team that night!"  and even the occasional "Whoa, that was a CRAZY shift...I can't believe that little one made it out of here alive!"

So I'm am leaving behind a hospital, a building, full of memories.  But I enter the new hospital, the new building, with all those great team members and the same patients.  This makes me confident that while I am leaving behind some really great memories, there will be many more great ones to be made!