From Sangre to Sangria

Just as I thought, this clinical rotation is great. No, it's awesome!!

I have gotten to do more hands on stuff in just today than I have in ALL my clinicals combined! And maybe it's because this is the first clinical that I've actually been precepted by a nurse practitioner rather than a resident or attending....go figure!!

Now that's a concept for all grad nursing schools to grasp: masters nursing students should be taught by masters prepared nurse practitioners! My past preceptors have been great, but if you're a nurse, you just don't do things the same way. You don't understand the role. You can't teach me HOW to be a nurse practitioner b/c you aren't one yourself!!

So back to current clinicals!! Like I said before, I am with the heart surgery team and it's great.

Today I got to pull my first (and second, and third!) chest tube ever!! It's definitely one of those things that I've seen done a billion times in the PICU, but until you're on the "pulling" end, you have no idea!!

The things are the size of garden hoses, coming out of little babies the size of my head!

And just to put it into perspective, my preceptor told me if I don't pull it "as fast and as hard as you are starting a lawnmotor" I wasn't doing it right!!

Now that you're all imitating pulling the lawn mower to start it up, you can see what force that takes!!

But it was fun...and I didn't give anyone a pneumo (which is the thing you most worry about!)

In the process, I definitely got blood splattered all over my (white!) lab coat. And even better, on my preceptors lab coat!! 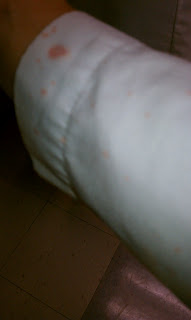 *This picture doesn't do the blood justice...I realized after I had taken it off and scrubbed it with hydrogen peroxide (which by the way is AMAZING at taking out blood stains!!!) I should take a pic!

But she didn't care...she said it wasn't a good pull unless blood was splattered across the room : ) *She was just kidding!

So I went home from a great day at clinicals (splattered with "SANGRE") and got to enjoy some delicious, cold, sangria with my man! Now that's a great day!!

From sangre to sangria...something I'm sure only a nurse would love and appreciate! And boy do I!!! 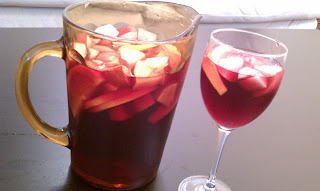