Note of disclaimer: I'm apoligizing in advance for the poor picture quality...we didn't have our camera, so we used our camera phone...so not the same! Again, sorry!

Now to blogging: As I mentioned before, our 6th Anniversary was June 4th! I still cannot believe that we've known each other for 10 years (10!!), and have been "together" for 9...and married for 6! Wow, time flies!!

But this year we decided to just stay local and enjoy what we have in our own town...and I guess it helps that we'll be in Cozumel in less than a week!!

I woke up super early, so I planned a surprise for Jon. He normally doesn't like surprises, but I figured who wouldn't like coffee in bed with a homemade card and a small gift...or two : )

So after our coffee in bed, we headed off to the city.

Our trip to the museum, and particularly Body Worlds was amazing. Body Worlds is international, so if you've never gone, I'd highly recommend it!! Now, I say that with a particular PICU nurse attitude!

I LOVED every minute of it!! Jon and I took the time to look at each individual exhibit, body part, splice of a body part, video, poster, you name it!! We read every little caption of every little part! We were probably in there for about an hour and a half...maybe a bit longer!

But I've heard from a few that it's "not that exciting" and people have finished in 20 minutes!! So I guess you do have to have an appreciation for the body, and the amazing components that it is made up of!!

That being said, one of my favorite parts was watching Jon look at everything! He had a look of amazement the whole time, and I could tell he was thoroughly taking everything in! He kept saying things like "WOW!! That's really what the ____ looks like?: or "WOW! That's really in our body and works that way!?" This was awesome! I wish I could have taken a picture, but no photographs were allowed : ( 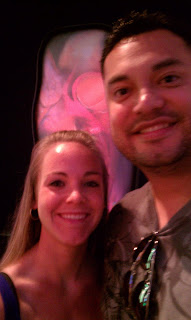 This was taken outside of Body Worlds, it was a huge beating, heart that could beat to your own heartbeat. 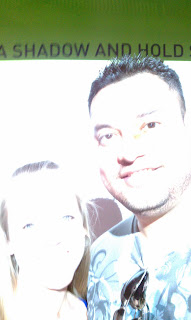 This picture was in the "Technology" exhibit...trying to show shadows and superimpose images...clearly our camera phone couldn't capture all of that!

After we finished Body Worlds, we ventured into the rest of the museum. That place is HUGE...and awesome!! There are so many cool things to look at and do...and we certainly didn't have time to get to them all! Guess we have a fun summer field trip ahead of us! 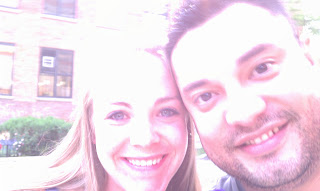 Part of the reason we didn't get through everything is because we were SOO hungry!!! We actually changed our plans kinda last minute and headed off to one of our FAVORITE pizza places (instead of the wine bar we initially were going to try)!! They are also a microbrewery, so you can't go wrong! 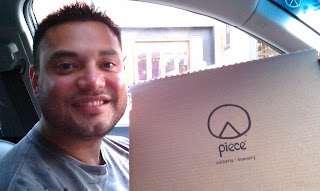 We got the "White" pizza (no red sauce or tomatoes) with garlic mashed potatoes and bacon. I know, this sounds either gross or like some pregnant woman's dream come true, but I have to tell you, this pizza is AWESOME!!!!! The flavors couldn't be more complimentary and the textures are out of this world 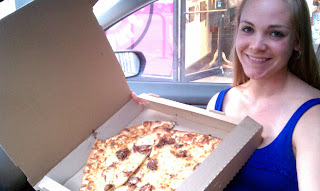 We saved plenty of left overs so that we could enjoy them the next day. And we also saved the leftovers because we were excited to hit up a new Frozen Yogurt bar. They have 15 different kinds of yogurt, and about a billion toppings. So you make your own sundae and pay by the ounce. We thought we'd be spending like $15 but it was only $6!! Hello, we are new converts!! 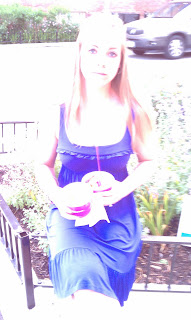 I know my face doesn't show it (I wasn't aware Jon was taking the pic yet!)...but the yogurt was GOOD!!!

Then we headed back home for a relaxing evening. I love just being able to put comfy clothes on, curl up in bed, watching a good show and being together. Yes, the events and adventures of the day were so much fun. But at the end of the day, it's just so nice and perfect to be able to spend time together at home.

So all in all, big trip not taken, we had an amazing 6th Anniversary. I think it ranks right up there in the "perfect day" category!! Starting off with surprises (which I LOVE...Jon, not so much!) and ending with relaxing can't get any better than that!