I made it through the first two days on my own as a PICU APN!

My preceptors thought I was ready to fly solo, so after being away from the PICU for 3 weeks, I came Thursday and yesterday not as an orientee, but as a full-fledged PICU APN.

I think I've said multiple times now that I'm an "official APN" like when I passed boards and became certified...when I was hired...when I started, etc.

And last night after my second shift was done, Jon asked how it all went.

My response was "Well, I didn't kill anyone, so it was a great 2 days!"

To which he responded "Baaaabe, don't say that! That's horrible!"

I just laughed.  Because really, if you're in healthcare this is something that is said ALL the time.

Case in point: Yesterday a co-worker was asking how my first day on my own was and I simply said "good".  She laughed and said, "Yeah, well no one died yesterday, so it must have been good!"

See, it's just not me who's into the whole morbid PICU humor!

I must say I lucked out for my first 2 shifts. When I left the PICU 3 weeks ago, we were maxed out with patients at 14 (when we usually only take 12 because there are only 2 providers on each day), and on top of having a lot of patients, many of them were really sick!

But this week, things have slowed down a bit.  Our team had 9 patients, and not too many were extremely sick.  So that helped me out a lot!

And I'm hoping that the" slowness" carries on through the weekend because I'll be spending 24 lovely hours there this weekend.  And actually I'm insisting on slowness because tomorrow I will be the only APN working with one fellow, and Sunday I am the only APN with NO fellow!

But it's where I'm at.  So here's to hoping that flying solo throughout this weekend will result in soaring, and not crashing into windows! 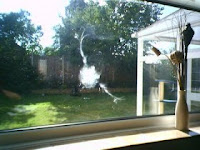 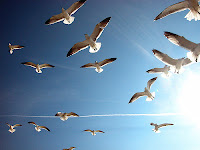