"Snow-magedden"..."Storm of the Century"... If you live in the U.S. you couldn't listen to a single radio or tv station without hearing the constant warnings of this horrific storm that would be affecting Oklahoma to Maine!

Being somewhere in between there, it was all people were talking about at clinicals yesterday. Except I never think it's ever as bad as the newscasters predict. Probably because it's never really as bad as they predict!

But, the upshot of all the "hoo-rah" was my school was officially closing down at 2pm until Thursday morning. WHAT???

Being in the medical field, you don't just "shut down" b/c of some snow...or ice...or the world blowing up. You just can't!! So it was a huge shock to me that my clinicals would be cancelled...and we'd get to leave early!

Thank goodness we left at 2. It took me 2 1/2 hours to get home...I can't imagine what it would have been if we left at 5pm! And I'll say the roads at 2 weren't great. Everything was white so visibility was pretty bad. And the wind was whipping around like crazy blowing everything white right at ya! 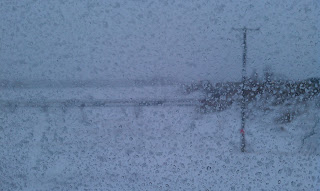 This is pretty much what it looked like out my window the entire way home. Good thing traffic moved so slow, b/c it was hard to see! And good thing brake lights are red! 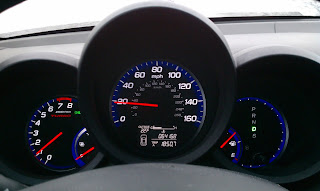 Yup, this was pretty much my maximum speed the entire way home! No wonder it took so long! 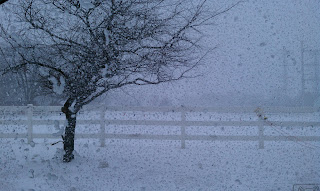 Even though it was a "crazy" storm, it still had its moments of beauty. 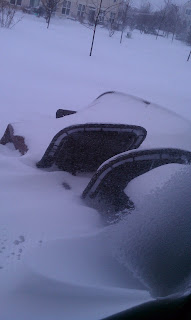 So I made it home safely, was super excited to sleep in, and have a SNOW DAY!!!!!! Jon and I fully plan on getting work done (he's working from home too!) but of course relaxing, and maybe even having a little Dance Revolution Battle!!!! What's a snow day where you're stuck indoors b/c of 60 MPH winds without a dance party : )
Oh, and the last picture is my patio furniture this morning when I woke up. It's still snowing and blowing like crazy, and the worst apparently is yet to come! But I don't see it as "worst"- I'm loving every single minute of it!!! It's not often (or ever!) you get a mandatory stay at home (when you're healthy) day! So that's exactly what I'm gonna do....and I'm going to enjoy every single minute of it!
Posted by Dana at 10:44 AM